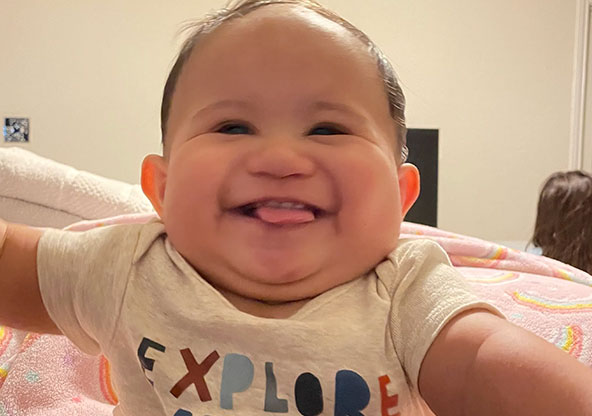 When Florencia Rivera learned she was pregnant, she knew in her heart she was having a boy. When the blood work revealed she was right, she was over the moon with excitement.

Besides being a little sleepy, her first trimester was uneventful. However, during her second trimester, Florencia and her doctors became concerned.

“I wasn’t gaining any weight. With my first child, I gained 80 pounds, and with my second baby, I gained 40,” said Florencia. “Instead of gaining weight, I was maintaining it or not gaining very much; I just knew something wasn’t right.”

Florencia’s motherly intuition was correct: The anatomy scan revealed that her baby boy had multiple heart defects. Her maternal-fetal medicine (MFM) doctor told her she needed to make an appointment with a pediatric cardiologist.

This all was happening as Texas was experiencing one of the harshest winters on record. Roads were iced-over and electricity was out for residents and businesses across the state, making it challenging to schedule medical appointments.

Finally, when she was about 24 weeks pregnant, Florencia could get in to see the pediatric cardiologist. The doctor told her that if her baby was going to need surgery, it wouldn’t be until he was between 4 and 6 years old. However, she advised Florencia to ask for an echocardiogram after the baby was born to make sure everything was OK.

At 36 weeks and 6 days, doctors induced Florencia, she delivered her baby boy, who she named Derick Ivan. Derick was born weighing 4 pounds, 4 ounces, and 17 inches long. He was immediately taken to the neonatal intensive care unit.

As instructed by her pediatric cardiologist, Florencia asked about the echocardiogram for Derick. It revealed that Derick had three heart defects: coarctation of the aorta, aortic valve stenosis and patent ductus arteriosus.

Coarctation of the aorta is when the tube that carries oxygen-rich blood to the rest of the body is narrower than usual.

Critical aortic valve stenosis happens when the heart’s aortic valve narrows. When the valve doesn’t open fully, it reduces blood flow from the heart to the aorta and the rest of the body.

Patent ductus arteriosus (PDA) is a heart defect in which a normal fetal connection between the aorta and the pulmonary artery does not close as it should after birth. PDA occurs most commonly in premature infants and often occurs with other congenital heart defects.

The doctors at a local hospital attempted to perform surgery to repair the coarctation of the aorta when Derick was 9 days old but Derick’s heart stopped beating twice – once at the beginning of the procedure and once during recovery. That is when doctors decided to transfer Derick to The Children’s Hospital of San Antonio (CHofSA) to continue his care.

Upon arrival, the team at CHofSA evaluated him and learned that all his organs were in distress. Dr. Victor Bautista, a pediatric cardiothoracic surgeon, was ready to operate on Derick, but opted to wait until he was more stable. In the meantime, Derick suffered a stroke and a seizure, making an already complicated situation more complex. Dr. Bautista also discovered that Derick had a three additional heart defects; unicuspid aortic valve, atrial septal defect (ASD) and ventricular septal defect (VSD).

The unicuspid aortic valve is a very rare congenital anomaly, which usually presents as aortic stenosis, incompetence or a combination of both.

An ASD is a birth defect of the heart in which there is a hole in the wall (septum) that divides the upper chambers (atria) of the heart.

A VSD is a birth defect of the heart in which there is a hole in the wall (septum) that divides the lower chambers (ventricles) of the heart and allows blood to pass from the left to the right side of the heart.

Florencia wasn’t sure what to think about these additional defects but knew Derick was in the right place to have them taken care of. On June 11, 2021, when Derick was just 19 days old and weighed only 4.4 pounds, he underwent surgery to repair the first three heart defects and he came out like a champ.

“The team was great about keeping us up-to-date every hour on the hour,” said Florencia. “We knew what was happening every step of the way.”

Derick did so well that he did not need to go on the extracorporeal membrane oxygenation (ECMO) machine, which was a huge blessing. Florencia remembers seeing Derick with his chest open, with tubes and wires. A wave of relief came over her and tears of joy flowed.

“I was overwhelmed and in a state of being incredibly thankful and blessed. While it was scary to see Derick in that condition, it was a beautiful thing to witness his heart beating under his wall chest,” said Florencia.

But Derick wasn’t out of the woods yet. He developed a condition called a chylothorax, an accumulation of lymph fluid around the lungs that made it difficult for Derick to breathe. He had to be put on a ventilator for well over a month.

After coming off the ventilator, Florencia was hopeful that maybe Derick would take a turn for the better. Instead, he needed yet another open-heart surgery because his aorta was narrowing. This heart defect is called supravalvular aortic stenosis (SVAS) and is a type of heart defect that develops before birth. It is characterized by a narrowing (stenosis) of the section of the aorta just above the valve that connects the aorta to the heart (aortic valve).

Once again, Baby Derick came through with flying colors and was able to have a gastronomy tube inserted in preparation to go home.

In total, Derick spent 137 days in the hospital and went home on Florencia’s birthday. During this entire time, it was extremely difficult for Florencia to leave his side but only did on most weekends to attend to her other children at home.

“I wanted him to know that I was always there and he could count on me. That way when he looked up, he always saw a familiar face and could hear a familiar voice; I thought that was very important,” said Florencia.

Since he’s been at home, Derick has flourished. He has gained weight very well and it seems that he just blew up overnight and went from newborn clothes to 9 -12 months sizes.

Florencia is grateful for the care her son received at The Children’s Hospital of San Antonio.

As for his long-term prognosis, Derick will need another surgery down the road. For now, he takes several heart medications to keep things in check and seizure medication to keep those under control. He also takes medication for hyperthyroidism and he also has sacral dimples which go hand-in-hand with tethered cord syndrome. Tethered cord syndrome is a rare neurological condition in which the spinal cord is attached (tethered) to the surrounding tissues of the spine. Derick will have an MRI and CT scan in the near future to determine if in fact he has Tethered Cord Syndrome and if he does, doctors have told Florencia that Derick will most likely need surgery to correct it.

“The nurses and the doctors were all so wonderful and patient with me, teaching me everything that I needed to know in order to take care of Derick,” she said.

During Derick’s stay at CHofSA, he and Florencia were introduced to the music therapy program. “Listening to the music was something that Derick seemed to enjoy and an activity that soothed him.” Florencia said “everyone in the hospital – from the doctors and nurses to housekeeping and maintenance – did their part to help make Derick and my stay as best as possible.”

“Derick is such a blessing from above and having him home and being able to watch him grow from the comfort of our own home is a real gift,” she said.

One of Florencia’s family members made a keepsake quilt for Derick. In the center is a photo of Derick’s grandmother, who has since passed away. Florencia wanted members of the CHofSA PICU team to sign the quilt and she wanted Dr. Bautista to sign it first.

“It was just appropriate for him to be the first in line,” said Florencia. “He’s the reason why Derick is here today.”

Derick is the true definition of what it is to be a heart warrior and thanks to the care team at CHofSA, he has faced and conquered all his diagnoses. Earlier this year, Florencia received unexpected and devastating news that Derick had liver cancer, a diagnosis that Florencia never expected to be hit with. In part 2 of this blog, Florencia will talk about how Derick has continued to fight for his life through this latest turn of events.