CHRISTUS Ochsner Health Southwestern Louisiana offers a complete range of services. From advanced technology to innovative procedures to skilled and experienced staff, we ensure the quality healthcare you need is always available. 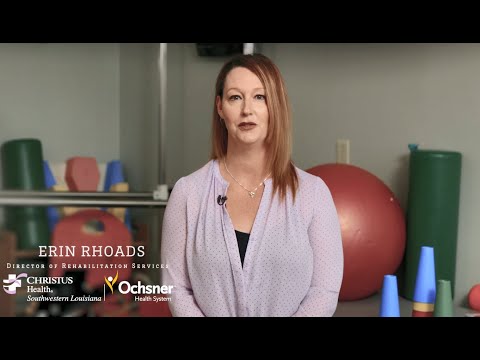 For years, Sulphur resident Jennifer Duhon lived with an unwelcome companion that had an outsized say in her daily activities: knee pain. Now, she’s happy to be firmly in control.
See Jennifer's Story

Let's help each other.

If you're passionate about community service, care deeply for people and have the time and energy, we'd love to have your help at CHRISTUS Ochsner St. Patrick Hospital or CHRISTUS Ochsner Lake Area Hospital. Volunteer opportunities are available in various departments throughout our hospital. Get in touch, and let's talk about how can help each other.

Our volunteers donate their time and talents for a variety of reasons including a desire to help others, stay connected to the community and to meet new friends.

Our volunteers assist and donate their time by:

In order to volunteer, you must:

To volunteer, please contact the Volunteer Coordinator, at 337-431-7199 or email at caroline.landry@christushealth.org.

History in Lake Charles, LA
In the early 1900s, Lake Charles, LA was the center of a growing lumber industry, yet it had no hospitals. Seeing the need for a quality medical facility, John Greene Martin, M.D., president of the local medical society, and Rev. Hubert Cramers, rector of Immaculate Conception Church, set about to provide for one.

They approached the Sisters of Charity of the Incarnate Word in Galveston, Texas, for help in setting up a hospital in Lake Charles like the one the sisters had established in Galveston. When the hospital was finished, Dr. Martin, a native of Ireland, insisted that it be named after St. Patrick, the patron saint of his homeland.

The new three-story hospital was dedicated on St. Patrick's Day in 1908 as St. Patrick Sanitarium, with 50 beds, an operating room and a sterilizing room. The name was later changed to St. Patrick Hospital which has continued its tradition of dedication and quality medical care for almost 100 years.

In 1866 three brave sisters from Lyon, France, answered the call of Bishop Claude Dubuis to minister to the "sick and infirm of every kind." These first members of the Congregation of the Sisters of Charity of the Incarnate Word worked to fulfill this call by opening Texas' first Catholic hospital in Galveston and, three years later, San Antonio's first private hospital.

With the move to San Antonio in 1869 and the difficulty of traveling between the two cities, the three Sisters of Charity of the Incarnate Word congregations became independent and continued their missions of healing.

Out of the original call grew the Houston-based Sisters of Charity Health Care System and the San Antonio-based Incarnate Word Health Care System. In 1999 CHRISTUS Health was formed to join the two health systems and strengthen the sisters' faith-based, not-for-profit health care ministry in Texas, Louisiana, Arkansas, Utah and Oklahoma. This co-sponsored health care system is one of the top 10 largest Catholic health systems in the nation. The system will take a leadership role in the health care field, furthering its Mission to extend the healing ministry of Jesus Christ.
Joint Venture
Since 2018 CHRISTUS Health and Ochsner Health System agreed upon a joint venture for the people of Southwest Louisiana.

The joint venture includes two hospitals, a charitable foundation, an ambulatory surgery center, imaging centers, and clinics. This joint venture will also be responsible for all future health care facilities and services operated by the two health systems in the Lake Charles area. CHRISTUS Health will manage the hospitals, CHRISTUS Ochsner St. Patrick and CHRISTUS Ochsner Lake Area, and Ochsner will manage all physician and clinic operations, with physicians and clinic staff transitioning to Ochsner employment. The 13 clinic locations in the Lake Charles area will also be co-branded to reflect both parties and will be named Ochsner CHRISTUS Health Centers.

“This partnership is for the people of Southwest Louisiana. By bringing together two strong organizations, we’re building on our respective strengths and bringing greater access to care for Lake Charles and the surrounding communities,” explained Ernie Sadau, president & CEO of CHRISTUS Health. “One of the most beneficial aspects of the joint venture will be our collective ability to recruit additional physicians and make a continued investment in critically needed service lines such as pediatric services, women’s services, cancer services including expanded clinical trials and specialty care for our aging population such as oncology and neurology.”