For Beatriz Humphrey, life is better - a whole lot better. Her family and her co-workers and customers at Tractor Supply in Kingsville say it simply: "She's a new woman!" Beatriz had a pulmonary vein procedure, performed by Dr. Ramesh Hariharan at CHRISTUS Spohn Hospital Corpus Christi -Shoreline, just before Thanksgiving last year. 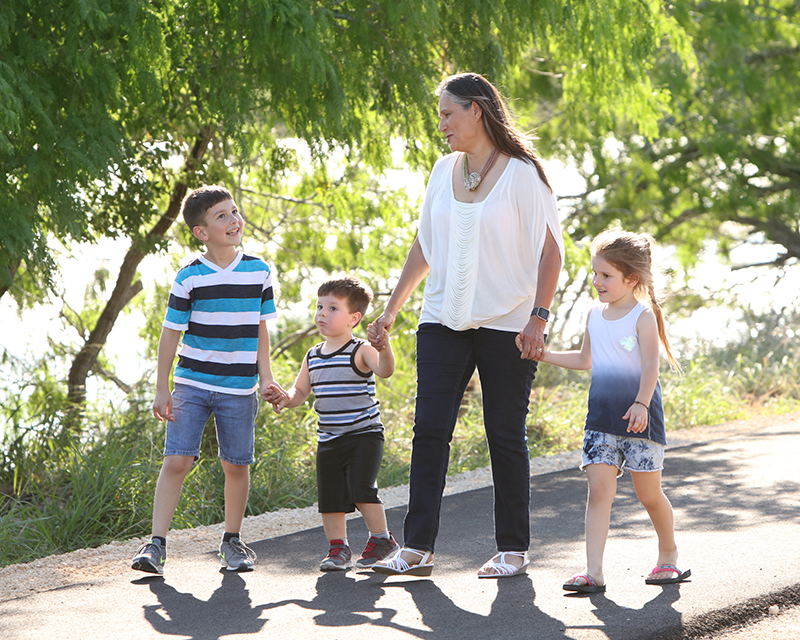 It was a life-changer ... in truth, a life saver. And, more than that, her grandkids have their grandma back. Romping on the playground with them is something Beatriz missed, but now she's back "in the thick of it." Dr. Hariharan, a clinical cardiac electrophysiologist and a professor for the Department of Medicine, Division of Electrophysiology at the University of Texas Medical School in Houston,spends one day a week at the Shoreline campus, working with patients like Beatriz who suffer from a heart condition called AFib-RVR (Atrial Fibrillation-Rapid Ventricular Rate) - in layman's terms, a runaway heartbeat.

"AFib is the most common heart arrhythmia in the United States," Dr. Hariharan says. Typically, it originates in the upper chamber of the heart, in the left atrium. The big risk to people who suffer from AFib is a high risk or stroke, which can be deadly. Essentially, AFib is an electrical problem in the heart - short circuits," he says. "What we do is re-set the circuitry, cauterizing the short circuits in that left atrium and that lets us re-regulate the heartbeat. It is a very safe procedure.

People are back on their feet in four hours, they go home the next day and they get their life back." The procedure - known more simply as an "ablation" - is non-surgical. A catheter containing a wire is inserted in a vein in the groin area, and can then be moved into the heart where a hot point at the end of the wire, about the size of a typical ballpoint pen, is manipulated to cauterize the short circuits. Dr. Hariharan has done about 120 of these procedures at CHRISTUS Spohn Shoreline's Heart Institute, which has the specialized technology needed.

For Beatriz, now 60, the first time she discovered that she had an AFib-RVR heart was in October, 2016. She had gone in for a pretty routine medical procedure, and then, suddenly, her heart just took off, beating more than 250 times a minute. She wound up in the intensive care unit at CHRISTUS Spohn Hospital Kleberg.

That began a roller coaster ride that saw Beatriz in ICU so often over the next year that she would ask for her "regular room".

"I was in ICU at least every other month," she says. "I was having about three AFib episodes per week. I was exhausted all the time, couldn't exercise or be active at all. Almost anything would set it off. In fact, once when I was watching Saturday morning cartoons with my granddaughter, I started laughing so hard that it triggered an AFib episode. It really bothered me that I couldn't do something as simple as laughing with my grandchildren. I wanted to be around for them."

Her daughter, Kimberly Barden, is not only mom to Beatriz's grandkids, but is also a registered nurse who works in the emergency room at CHRISTUS Spohn Hospital Kleberg, and as much as she loves her Mom, Kimberly was seeing way too much of her in the hospital. Beatriz's cardiologist in Kingsville, Dr. Milton Beato, told her about the pulmonary vein procedure and recommended she have it done. "But," she says, to have it done because it had to do with my heart."

Finally, she came to grips with the problem. "I have a heart condition - it's not about anxiety or working too hard. It's a heart condition and it had to be fixed." "I had another trip to the ICU, got discharged Friday and was right back in ICU on Saturday," she says. "We were at a standstill. No medications or other treatments were helping; my color was grey and I felt like I was going to die soon." "Dr. Beato said 'You're too young to be in here -you need to have that pulmonary vein procedure and I know who should do it,"' Beatriz says. "He told me about Dr. Hariharan, who everybody calls 'Dr. 'H.' I said, 'Okay, let's go.'"

Dr. Beato called Dr. Hariharan to set-up Beatriz with an appointment, and the very next day the procedure was performed. "Dr H. said, 'don't worry, you're in good hands and when we finish, you will be a new woman.' He was right! It was done on a Wednesday afternoon, I was discharged on Thursday and was back at work the next Monday. Dr H. had told me to take it easy for a while, but I was feeling so great that I was ready to go and everybody noticed it right away!"

Dr. Hariharan said, "Beatriz had been hospitalized multiple times and the medications she had been taking just weren't getting the job done. She needed this ablation procedure. We invited her daughter, Kimberly, who is a RN, in to watch the procedure and she was amazed to see it work on her own mom."

Now, just a few months after that pre-Thanksgiving procedure at Shoreline, Beatriz says, "I feel wonderful! With all those AFib episodes, I was afraid to do anything or go anywhere. Now, I tell people, 'if your doctor recommends that procedure, get it!"' "I owe it all to Dr. Beato, Dr. H, my daughter and God," she says. "Dr. Beato insisted that I meet Dr. H, who gave me the confidence to have that procedure. My daughter took care me and God watched over me. That combination is hard to beat.'' "Now, those grandkids can barely keep up with me!"