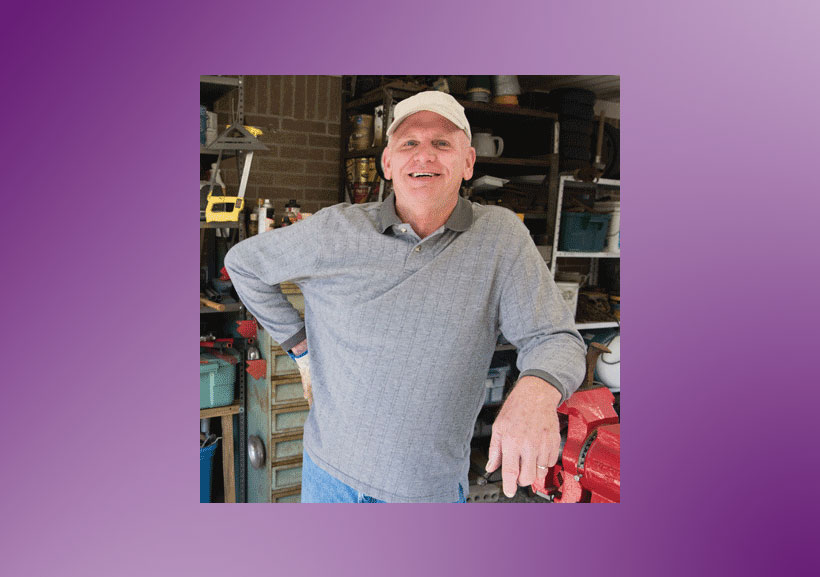 During the holiday season, Don was more fearful than joyful. He came home from CHRISTUS Highland Medical Center on Christmas Eve with a stent in one of his coronary arteries, three days after having a heart attack while painting a house.

“I was depressed and scared to death,” Don says. “I didn’t know what to do with myself, or what I could or couldn’t do. I knew my life had changed, but I didn’t know how.”

In his free time, Don had a passion for restoring and re-purposing old machine equipment into sculptures. Now, facing depression in the wake of his surgery, Don needed to restore himself. Don’s cardiologist referred him to CHRISTUS Cardiac Rehab. Though located at CHRISTUS Louisiana Athletic Club Shreveport, this was not the kind of exercise-focused program that many recovering cardiac patients experience.

Don entered the Pritikin ICR™ (Intensive Cardiac Rehabilitation) program, a comprehensive approach to cardiac recovery that includes monitored exercise as well as education about adopting smart dietary choices and a positive mindset — the ingredients patients need to live a heart-healthy life. CHRISTUS Shreveport-Bossier Health System became the first in Louisiana to offer the Pritikin ICR program. All 72 Pritikin ICR sessions are reimbursable by Medicare and many private insurers. Don was initially skeptical, but the program and its staff quickly won him over.

“Each session opened with a video about a different topic related to heart health, and I found them to be extremely helpful,” Don says. “I learned depression is common after a heart attack. Our thoughts can heal our hearts — that’s one of the most important lessons I took from rehab. I truly believe that now.” After the videos came education sessions on various topics, such as how to read food labels, followed by a monitored workout featuring both upper and lower-body exercises. Don appreciated the structure of the program and came to look forward to going to rehab.

“I’d retired, remodeled a house and then had a heart attack — I didn’t know what was supposed to come next,” Don says. “Rehab got me out of the house and into a structured environment in which I could work on getting better. Every provider involved with the program always had time to talk with me and help me work toward my goals.”

A POSITIVE PRESENT AND A BRIGHTER FUTURE

Don attended rehab three times a week for a total of 72 sessions and finished early this past summer. The lessons he learned are reflected in his new daily routine. He has found an oatmeal he likes that’s replaced the sugary cereal and cinnamon rolls he used to eat for breakfast. A recipe for whole-grain spaghetti with ground turkey that he learned from the program’s dietitian has become one of his favorites. He realizes his old ideas of being active — standing while welding and painting, and chopping wood for a few minutes at a time — didn’t provide much of a cardiovascular workout. He now walks a mile or two every morning before getting to work on his sculptures.

“The certificate I received for completing the program is nothing but a piece of paper, but it symbolizes the fact that I did it,” Don says. “I didn’t quit. I overcame the depression I felt. The program gave me my life back. The mental part was the most important. I realized I was a different person, but that wasn’t bad. I could be a new person. Without this program, I don’t know where I’d be today.”