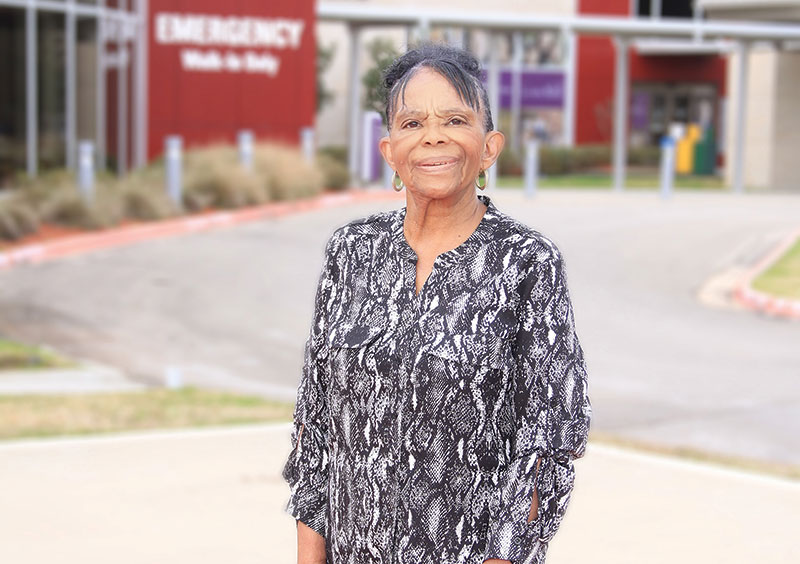 It was Dec. 5, 2018. Erma McKinney, a Jasper resident, was running errands with her daughter, Angie Gill, when she began to experience chest pain and an overwhelming feeling of nausea.

“I told Angie that she needed to take me to the emergency room immediately,” Erma says. “I began vomiting in the parking lot on the way to the car. Angie asked if I wanted to call an ambulance, but I thought it would be faster to head to the hospital ourselves. Sure enough, we arrived in the nick of time. By the time Angie had worked her way around two streets that had been blocked off, dropped me off at the Jasper emergency room and came back into the hospital to find me after parking the car, the nurses had called a code blue.”

“Erma presented with a life-threatening heart event, and the team did an excellent job providing lifesaving measures. Within an hour, her condition had significantly improved, and she was sitting up, visiting with the staff,” says Todd David Morrell, M.D., the Jasper emergency room physician who attended to Erma that fateful day.

“It was incredible to go from CPR to a smiling patient within an hour. I hope you have a chance to share this story and spread the reputation the team at Jasper deserves. I am both proud and thankful to work with these folks. I am sure that the same incredible job would have been accomplished at any other hour of the day with any of the other amazing staff. Thank you for your support of this great team.”

Dr. Morrell and the emergency room nurses were able to stabilize Erma so she could be flown by Life Flight to CHRISTUS Southeast Texas St. Elizabeth in Beaumont. There, surgeons performed coronary artery bypass grafting, a surgery that helps increase blood flow to the heart, and Erma went on to make a full recovery.

Angie attributes her mother’s positive outcome to the prompt, attentive care she received at the hands of the Jasper emergency room staff.

“They did everything they could to bring my mother back and make sure she was stable,” Angie says. “They worked as a team and did a great job getting her to a hospital where she was able to get the treatments she needed.”

Erma agrees.“The physician and nurses who took care of me in the emergency room were all extremely nice,” Erma says. ”They saved my life.”