Restoring a Life of Motion 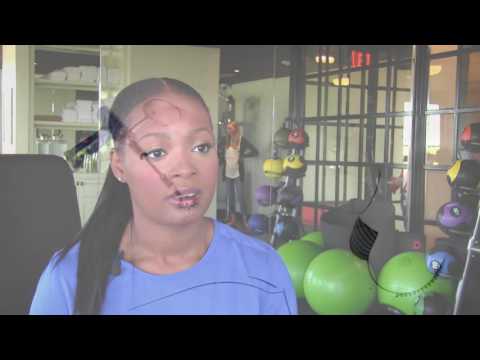 When 30-year-old Kimberly Waddy began experiencing pain in her hip, she visited her primary care physician to investigate the cause. She never thought she’d need a total hip replacement

Kimberly’s primary care physician referred her to a hip specialist. A magnetic resonance imaging (MRI) scan revealed Kimberly had avascular necrosis, a disease that occurs when bones are cut off from oxygen-rich blood, according to the National Institute of Arthritis and Musculoskeletal and Skin Diseases. Over time, the poor blood supply can cause bone tissue death, which leads to the eventual breakdown of affected bones and joints.

For many people, like Kimberly, avascular necrosis affects the head of the femur, the bone that extends from the knee to the hip. Kimberly’s physician believes she developed the disease because she takes prescription steroids to control lupus symptoms. Unsure of how to treat Kimberly, the hip specialist referred her to another orthopedic surgeon, who recommended core decompression surgery. This procedure involves drilling one or more holes into the end of the femur to promote blood flow and relieve pressure, according to the American Academy of Orthopaedic Surgeons (AAOS). Before proceeding with the surgery, however, the physician referred Kimberly to Matthew Morrey, M.D., orthopedic surgeon at CHRISTUS Santa Rosa Hospital –Medical Center, for a second opinion.

Dr. Morrey agreed that core decompression surgery was a possibility, but he gave Kimberly a choice. She could move forward with the operation or try non-surgical methods such as steroid injections.  Kimberly, who is an employee at Gold’s Gym, decided to go with the decompression, but her pain persisted and eventually became debilitating. Dr. Morrey ordered another MRI, which revealed troubling news. The head of Kimberly’s femur had collapsed at the hip joint, causing severe pain in her hip and groin. “I could barely walk because of the pain and limited range of motion,” Kimberly says. “Dr. Morrey said I could try other non-surgical methods or have a total hip replacement. I decided to have the hip replacement.”

Dr. Morrey is the first physician in San Antonio to offer Mako™ Robotic-Arm Assisted total hip replacement, a robotic assisted surgical alternative to traditional joint replacement surgery that is driven by the Mako System. “The premise behind Mako System is that it gives surgeons the ability to more precisely match the size and position of the implants placed during joint replacement surgery to each patient’s individual anatomy,” Dr. Morrey says. “Using the technology, we can more naturally recreate the mechanics of the hip or knee joint.” The templates used during a typical total joint replacement are based on preoperative X-rays of the patient’s hip joints. The goal of preoperative planning is to recreate the natural hip joint and prevent complications, such as hip dislocation and changes in leg length that require a shoe lift.

Before a Mako System total hip replacement, patients have a computed tomography scan of their hip. This scan is used to create a 3-D replica of the patient’s hip and femur, which allows physicians to more easily plan and individualize the procedure, according to Stryker®. While performing surgery, physicians also have access to specialized software that provides feedback about implant placement in real time. “Using the robotic-arm assisted surgical system, we can actually see how variations in placement affect leg length and positioning during surgery,” Dr. Morrey says. “We can then adjust the implant as necessary to reproduce a more natural hip.”

Total hip replacement is one of the most successful treatments for avascular necrosis. In 90 to 95 percent of patients, the procedure results in pain relief and better joint function, according to the AAOS. Kimberly was admitted to CHRISTUS Santa Rosa Hospital – Medical Center for total hip replacement on Feb. 22. The surgery went smoothly, and Kimberly was able to go home the following afternoon. While her full recovery will take roughly three months, she has already noticed relief. “The pain I had in my groin and hip area when I walked or put weight on my hip joint is gone,” Kimberly says. “I’m very happy with the outcome. My experience with CHRISTUS Santa Rosa Hospital – Medical Center was great, and Dr. Morrey is excellent. I would recommend him to anyone.”