Jeneva Sotello and her husband Vernon Kistler were surprised when they discovered they were expecting another baby. They hadn’t planned on welcoming a new addition, and they were initially stressed and worried about how they would manage with an already full household. But they soon embraced the idea and couldn’t wait for Baby Vernon’s arrival.

Because she had no problems during pregnancy, Jeneva decided to deliver Baby Vernon at CHRISTUS Santa Rosa Hospital – Westover Hills. The couple didn’t anticipate needing access to a level IV neonatal intensive care unit (NICU) and weren’t expecting anything out of the ordinary. However, as soon as Baby Vernon was born, he would need to be transferred to The Children’s Hospital of San Antonio (CHofSA) because he had trouble breathing.

“I barely got to see him after delivery. The nurses took him immediately and then informed me that he would need to be transferred because he was in distress,” said Jeneva. “I got to give him a quick kiss, and then they whisked him away.”

Jeneva had to spend the night in the hospital because doctors wanted to monitor her after giving birth; she would have to wait until the next day to see Vernon again.

“As soon as I was discharged, I headed over to The Children's Hospital of San Antonio so I could see my baby. The doctors had Vernon connected to a bunch of machines and were giving him lots of medication because he wasn’t responding to any of the other treatments,” said Jeneva. “It was a scary sight.”

Because Vernon had meconium aspiration syndrome, he was at risk of developing hypoxic-ischemic encephalopathy (HIE). A neonatal brain injury, HIE occurs when a baby’s brain does not receive oxygen and can cause brain impairments, including epilepsy, developmental delays and motor and cognitive skill problems.

Dr. Maria Pierce, a neonatologist at The Children's Hospital of San Antonio, initiated a procedure called whole body cooling to help lower Vernon’s body temperature. The process helps slow down the brain’s metabolism to prevent further damage. His care team also placed Vernon on an extracorporeal membrane oxygenation (ECMO) watch. ECMO is a heart and lung bypass machine that pumps and oxygenates blood outside the body allowing the heart and lungs to rest until they have time to recover. CHofSA is one of only a few centers in the region that can perform ECMO to support these babies. 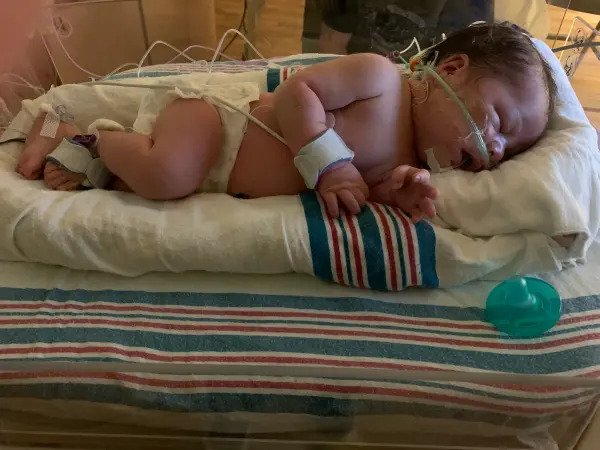 Thankfully, Vernon never needed ECMO because as soon as Jeneva arrived and was able to be near Vernon, he started to turn a corner. His breathing and other vital signs steadily improved.

“It was like Vernon knew his mom was near and could relax,” said Jeneva. “From there, he just continued to get stronger and better.”

Jeneva and her husband were relieved that Vernon was improving. They had never experienced anything like this with their other children, so everything was somewhat chaotic.

“We just didn’t know what to expect, and it was overwhelming going back and forth to the hospital while managing our other kids and our home-based business,” said Jeneva. “And not knowing how much longer he would have to stay in the NICU was hard, too.”

Vernon was born on January 28 and spent 40 days in the NICU at CHofSA before being discharged on March 9.

Since he’s been home, Vernon has been doing really well. He’s been growing and is always hungry.

Jeneva says Vernon is always smiling, and the other kids love to play and talk to him. He has reached several milestones, and doctors expect him to grow into a normal, healthy child.

Although Vernon’s experience was stressful for their family, Jeneva and her husband know they were in the right place at the right time.

“All of the nurses and the doctors who took care of Vernon were incredible, especially Dr. Pierce. She would always keep me updated no matter what,” said Jeneva. “I couldn’t always be at the hospital because I had other kids to take care of, but I know Vernon was always in good hands, and I didn’t have to worry constantly.”

When asked about what Jeneva would say to other mothers facing similar circumstances, she said she would tell them to lean into prayer and leave it in God’s hands.

“The whole time we were going through everything at CHOSA, I just kept believing that everything was going to be OK, and it was. I had every faith in the doctors and the rest of the care team and knew in my heart that everything would be all right,” she said.

To learn more about the Level IV NICU at The Children’s Hospital of San Antonio, please visit: https://www.christushealth.org/childrens/services-treatments/nicu.

CHRISTUS Health has board-certified neonatologists specializing in the care of premature infants or newborns who need extra medical care.