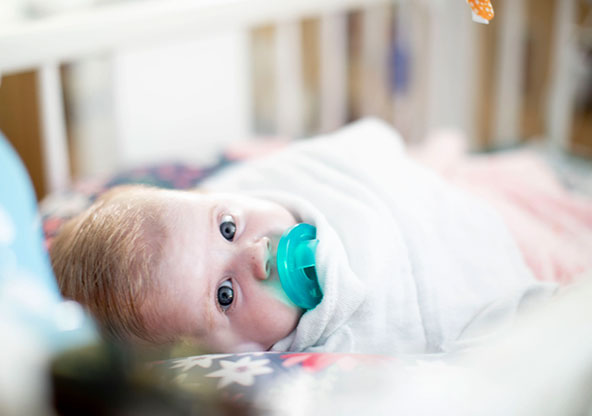 Joanna Hargett and her husband, James, were on a whirlwind trip across North America when she discovered she was pregnant with her third child.

“Our two other children were young and not in school, so we decided to join my husband on his business trips and enjoy some quality family time,” said Joanna. “When I learned I was pregnant, I knew it was time to get back home.”

After Joanna and her family settled back into their home in Brady, Texas, located about two-and-a-half hours from San Antonio, she went in for her first prenatal visit and ultrasound.

Joanna’s motherly instincts kicked in during the sonogram, and she knew something was not right.

“It took them forever to find the heartbeat, and that made me nervous,” said Joanna. “I messaged my husband and told him that something was wrong with our baby’s heart.”

Joanna was referred to maternal-fetal specialist Dr. Lissa Melvin with the Center for Maternal and Fetal Care at The Children’s Hospital of San Antonio. Bound and determined not to sink into despair, Joanna remained calm and told herself not to worry.

“I leaned on my faith and knew whatever was happening, it was in God’s hands,” said Joanna. “I knew I had to remain strong not only for the child I was carrying – Madeleine ‘Maddy’– but for my other two daughters I had at home,” Joanna said.

“Once I realized that Maddy would require multiple surgeries, one at birth and one at six months, I decided we couldn’t continue to make the trip from Brady regularly,” said Joanna. “But I was tired. I was pregnant, and I had no energy. I didn’t want to move.”

Not too long afterward, Joanna and her husband learned about a family interested in renting their house, allowing them to find an apartment closer to the hospital.

“Things lined up perfectly, confirming that we made the right choice to move closer to Children’s, at least for the time being,” said Joanna.

As Joanna settled her family into the apartment, she received an unexpected and unsettling phone call. The Heart Center team had weighed all the options and felt that she would benefit from having access to an interventional cardiologist immediately after birth or after her surgery. Due to the unavailability of an interventional cardiologist during the time of her scheduled delivery, it was recommended for her to consider delivery and cardiac surgery in Houston.

The phone call threw Joanna for a loop. After all, she had already uprooted her family, and the idea of moving to a new city where she did not know anyone was quite daunting – especially nine months pregnant. After evaluating her options and knowing Children’s surgeons could perform Maddy’s surgery, Joanna and her husband decided to stay in San Antonio. She put all her faith in the medical team at Children’s and knew deep down she had made the right choice.

Knowing there was a chance that Maddy might not survive, she did what any mother would do: plan. She knew for sure that she wanted to have Maddy to baptized, so Joanna enlisted a chaplain’s help and spoke to Child Life about what steps she would need to take if the worst-case scenario came to fruition.

“It was all really overwhelming, and I just wanted to be ready for either outcome,” said Joanna.

When the delivery day arrived, Joanna had her first C-section and was not sure what to expect. Since learning that Maddy had a heart defect, she had remained strong, but when she heard Maddy crying after she was born, Joanna let her tears finally flow.

“The entire time, I had been strong and kept a handle on my emotions, but when Maddy made her entrance into the world, I could no longer keep them inside,” said Joanna.

As soon as Maddy was delivered, nurses rushed her to the neonatal intensive care unit (NICU), where the chaplain baptized her. Joanna could not hold Maddy for the first couple of days, but she remembered that it was truly amazing when she finally had the opportunity.

Maddy was born on the Thursday before Thanksgiving, and less than a week later, she had her first surgery performed by Dr. Victor Bautista-Hernandez, a pediatric cardiothoracic surgeon at Children’s.

“When I first met with Maddy’s mom months before delivery, we had a long and frank conversation regarding her daughter’s severe condition,” said Dr. Bautista-Hernandez. “Maddy not only had one of the most complex forms of congenital heart diseases, hypoplastic left heart syndrome, but also one of the worst anatomic subtypes.

Out of the four valves of the heart, she had two completely closed and non-functional and one with significant leakage. In addition, her ascending aorta and aortic arch were very small (only 2 millimeters at most) which significantly complicated the surgery.”

“Despite the challenges, Joanna and James wanted their daughter to undergo surgery with our team at Children’s Hospital of San Antonio/Baylor College of Medicine and that determination remained over time,” the surgeon added.

“The day of the surgery is what everybody looks at, but you need a talented team of health professionals to get one of these patients through,” said Dr. Bautista-Hernandez. “The excellent care provided by our MFM, pediatric cardiology, ICU teams and all others led to a well-preserved newborn going to the OR in excellent condition and having a speedy and uneventful recovery.”

“There were hundreds, if not thousands of people praying for Maddy,” said Joanna.

Maddy’s procedure lasted between six and eight hours. Too anxious and worried to sit still in a waiting room, Joanna and her husband sat in their car until the surgery was over.

Maddy made it through surgery, and Joanna vividly remembers how she reacted when she saw her daughter with an open chest and her heart beating. “I just broke down and cried so hard. It was one of the hardest moments of my life,” Joanna said. When performing heart surgery on a newborn, the heart swells. The incision is left open for a few days to allow the swelling to go down so the heart fits back into the chest.

She recollects how Maddy’s skin was cold to the touch because her chest was open and how scary some of those moments were. Joanna would sit at Maddy’s bedside and pray the rosary every day. After the cardiovascular surgeon stitched Maddy’s chest closed, Joanna was able to breathe a sigh of relief. She remembers going to see Maddy and holding her hand. As Joanna started talking to her newborn daughter, Maddy looked up and stared into her mother’s eyes.

“At that moment, I knew it was going to be OK. She is here. She knows me. I know her. I finally felt like her mother and not a spectator on the sidelines,” said Joanna.

Plans were in motion to get Maddy home. Then, around Christmas, Maddy’s cardiology team suspected a narrowing of her aortic arch, so Maddy underwent a catheterization to gather more data about her heart – information an echocardiogram would not necessarily reveal. Fortunately, her surgery looked great, and the arch was intact, so she did not need a balloon or stent. It was welcome news.

On February 11, after spending 85 days in the NICU, Maddy was released home to be reunited with her two older sisters. She will need to be seen at least once a week and then back again in four months for another surgery.

She has been doing well and has experienced only minor issues like acid reflux, arrhythmias, and is fussy about eating, but otherwise, she is progressing well. Doctors are hoping the G-tube they inserted will help with that, and Maddy will soon be on her way to a full recovery.

Through it all, Joanna’s faith, while shaken, helped to see her and her family through. She said she is grateful to the team at The Children’s Hospital of San Antonio for all their support.

“Maddy is a symbol of God’s faithfulness and will forever be my rock,” said Joanna. “God’s will has been manifested throughout our entire journey, and I know without a doubt, it will continue to unfold throughout Maddy’s life.”