Emily didn’t find out she was pregnant until she was 26 weeks along. She only had a short time to prepare for the birth of her son.

Emily Strange didn’t realize she was pregnant until she was about 26 weeks along. Because she had Type 1 diabetes, she didn’t experience any of the usual symptoms of pregnancy. Emily and her boyfriend, Brandon, were shocked to receive the news.

“When I learned I was pregnant, I was a bit scared because I didn’t feel prepared. Most people have nine months to prepare; I had about three,” said Emily.

At the same appointment, Emily decided to learn the gender of her first-born baby:  a little boy she decided to name Colton.

Airing on the side of caution, her obstetrician at San Antonio Military Medical Center (SAMMC) decided to hospitalize her to make sure her blood sugar levels stayed within the normal range. If they went too high, it could have been dangerous for little Colton.

After about three days in the hospital, Emily was able to go home and enjoy some quality time with family and friends before Colton’s arrival. She also was able to have a baby shower. 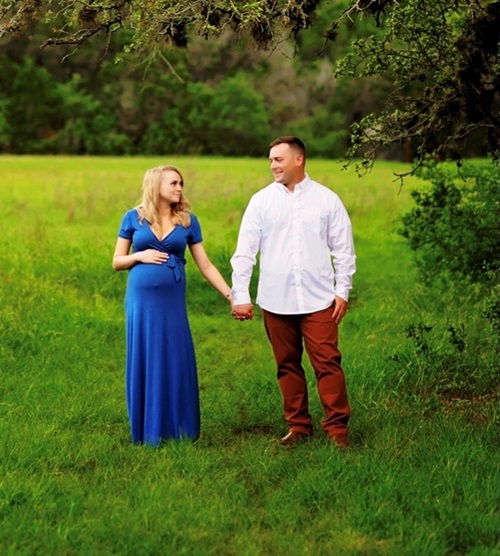 Everything was going smoothly. Because Emily was high risk, she had to go in weekly for what is known as a non-stress test. A non-stress test is a common prenatal test used to check on a baby’s health.

When she was about 36 weeks along, Emily went in for a routine non-stress test. After they hooked her up, they noticed Colton’s heartbeat was too low.

“They tried every trick in the book. They gave me some ice-cold water, put some vibration on my belly, and moved me to my side in hopes that Colton would wake up, but there were no spikes in his heart rate,” said Emily.

Doctors decided to do an ultrasound to see if everything was okay. The next thing she knew, Emily was told that Colton would be arriving that day – about four weeks before his original due date. All Emily could think about was that the car seat hadn’t been installed and that she had no stroller. How could this be happening now?

Emily desired to have a natural birth, but because of Colton’s condition, it was best that she have a C-section to get him out of the womb as soon as possible. At 8:35 p.m., Colton came into the world and Emily remembers a nurse showing her Colton quickly and then rushing him off to a corner of the room to an incubator.

“There was no crying nor any excitement, and I wondered what was going on,” remembers Emily.

Colton was having issues breathing and had stopped breathing for a few minutes. Nurses and doctors were doing everything they could to help him.

Around midnight, Emily and Brandon were finally able to meet their baby boy. He was hooked up to multiple machines and was lying on a cooling blanket to regulate his temperature, a scene that broke Emily’s heart. Because he had experienced some brain trauma, they were unable to hold him or even touch him. The NICU doctors and nurses could get his breathing regulated again, and Emily and Brandon thought they had gotten through the worst of it. That is when they learned Colton had hydrocephalus or fluid on the brain.

The doctors at SAMMC told Emily and Brandon that Colton would need surgery to place a shunt. Since they did not have a pediatric neurosurgeon on staff, Colton would need to be transferred to The Children’s Hospital of San Antonio (CHofSA).

When the team at CHofSA came to pick up Colton, Emily had to stay behind because she was still recovering from her C-section. Brandon went to be with their newborn son and stayed by his side as much as he could, catching an occasional nap in the car.

As soon as Emily received her discharge papers, she went straight to CHofSA. She couldn’t wait to be reunited with Colton. At this point, he was three days old.

“When I did get to see him, I could put only one finger on him; I couldn’t stroke him because he was just experiencing too much trauma, including seizures. He couldn’t take the extra stimulation,” said Emily.

So, Brandon and Emily would spend hours next to Colton in his incubator. They would read books to him and talk to him. They didn’t know if Colton could hear them, but in case he could, they thought the sound of their voices would be comforting to him.

In many ways, the experience was somewhat of a waiting game until they got results back from an MRI, CT scan, and ultrasound. Colton had experienced quite a bit of swelling in his brain while, at the same time, more fluid was accumulating.

At this point, Emily and Brandon were told that Colton could go blind or deaf or that he would be unable to walk and be in a wheelchair for the rest of his life. There were many unknowns, and there was no way to be sure. 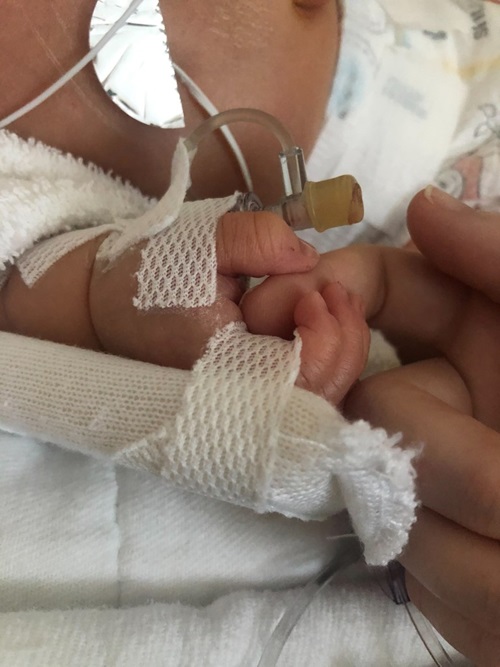 Despite being terrified for Colton, Emily and Brandon remained strong for him. They discussed options with the neurosurgeon, Dr. Kimberly Terry, and waited for Colton to have his shunt surgery.

Their plans got derailed when Dr. Terry told them that Colton’s head had become extremely swollen. Dr. Terry said the next step before having the shunt would be to do a series of what are referred to as taps and a reservoir surgery to help manage the fluid in his brain. On July 2, when Colton was less than a month old, he had reservoir surgery and came out like a champ.

“It was really frightening. I had never experienced anyone having brain surgery before. And it seemed like forever in the waiting room,” said Emily. “And then Dr. Terry came out and said the surgery went great and that Colton had had his first haircut. She even saved the hair as a keepsake for me.”

On August 18, Colton had his shunt surgery. And on August 25, Emily and Brandon were able to take their baby boy home after spending 80 days in the NICU. 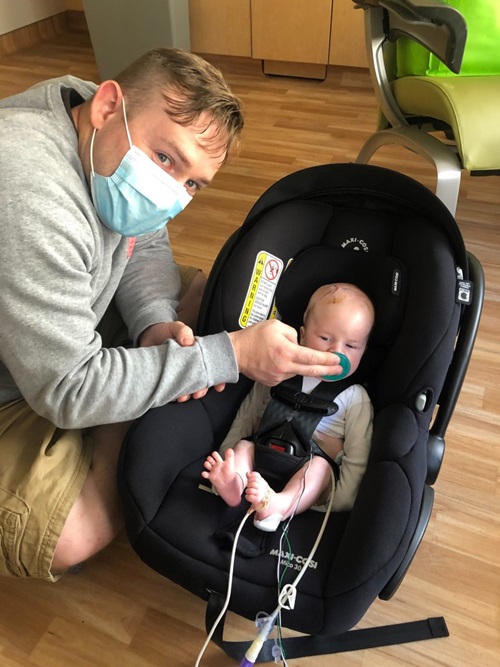 Before leaving the hospital, the NICU team made sure Colton was able to sit in his car seat safely for the ride home.

While being in the NICU wasn’t exactly where they planned or hoped to be, Emily said it was a positive experience. The nurses in the NICU went the extra mile and decorated his bed for Father’s Day, the Fourth of July, and back-to-school.

“The team at CHofSA made us feel like family. We never felt uncomfortable, and they always made us feel welcome. The doctors and surgeons, including Dr. Kimberly Terry, Dr. Maria Pierce, and Linh Reeves, did a great job of keeping us informed and reassuring us, even when they had to deliver bad news. It was a great experience,” said Emily.

As for Colton, he loves being at home. He gets to be with his mom and dad all day, and they all enjoy that. While he’s hitting some of his newborn milestones, he’s not hitting them as a full-term baby would due to the issues with his brain. He has regular weekly appointments with different specialists to check on his progress and Emily is hopeful he will start to catch up.

“We don’t know what the future will bring. For now, we are taking it one precious day at a time,” said Emily.