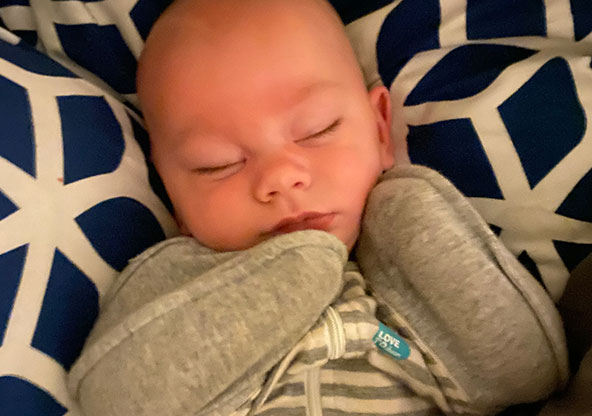 From the pitter patter of little feet running across the room to a hungry newborn waking up to nurse again, to getting their oldest child ready for school, Shanon Maddux and her husband, Jeremy, have their hands full. They are parents to 8-year-old Bryley, 2-year-old twins, Laine and Forrest, and 4-month-old Easton, the newest addition to join their expanded family.

“Last April, I was surprised when I found out I was pregnant with Easton,” said Shanon. “My husband and I had been trying for several months to have another baby. It was easy to get pregnant the first and second time, but we struggled to have our fourth child. We thought another baby was just not in the cards for us. And then, Easton came along, and everything changed at that point. My husband and I were excited and thrilled to become a family of six.”

Other than feeling overly tired, flu-like and nauseous during most of her first trimester, Shanon’s pregnancy was going well. As her second and third trimesters progressed, Shanon developed placenta previa where the baby’s placenta partially covers the cervix which can lead to severe bleeding during pregnancy and delivery. As a precaution, Shanon had sonograms every four to six weeks – and each time – the placenta previa was gradually resolving itself. Throughout her pregnancy, Easton was getting bigger and stronger, and his measurements were right on target.

“His ultrasounds were perfect,” said Shanon. “His head measurements were always good, and he was growing and developing normally. I asked the ultrasound technician how my baby’s heart was doing. She said all four chambers were working well and his heart rate was within the normal range. Everything was checking out for Easton. He was a healthy and strong baby.”

When Shanon was 34 weeks along, she began leaking amniotic fluid. Concerned, her OB-GYN had her admitted to Labor and Delivery. Her doctors wanted to make sure she had enough amniotic fluid, which she did. Shanon was put on steroids for two days to make sure Easton’s premature lungs were strong. Two days later, on November 17, 2021, Easton was born via Cesarean section since he was a breech.

While this should have been a joyous occasion – nerves quickly set in. Within a minute or two of Easton being born, the nurses were having a tough time oxygenating him. An hour after he was born, Shanon still had not seen her baby. Then, as she was recovering in the post-op room, the nurse handed her the phone – and that’s when she got the news she wasn’t expecting to hear.

“Our son had congestive heart failure,” said Shanon. “I was in total shock and disbelief because his ultrasounds showed his heart was healthy and strong. After running more tests on him, the cardiologist diagnosed Easton with transposition of the great arteries. Since they didn’t have the means and equipment to treat the defect, Easton was quickly transferred to The Children’s Hospital of San Antonio (CHofSA) within three hours of his birth so he could get the emergent cardiac care he needed.”

Transposition of the great arteries (TGA) is a rare congenital heart defect in which the two main arteries leaving the heart – the aorta and pulmonary artery – are reversed. That is why the care team had a difficult time oxygenating Easton soon after he was born. He had no oxygenated blood flowing throughout his body. The oxygenated blood was flowing in and around his heart.

At midnight Easton was transferred from the referral hospital directly to the state-of-the-art pediatric catheterization lab where he was awaited by his neonatologist, anesthesiologist, cardiologist and cardiovascular surgeon. With the cardiovascular surgeon on standby, Easton underwent a lifesaving emergency atrial septostomy. Creating a hole between the right and left side of the upper chambers of Easton’s heart allowed oxygenated blood from his lungs to flow throughout his body. This procedure was a temporary fix until he could have the arterial switch operation to permanently correct his transposition of the great arteries.

“Although the procedure went very well, Easton had more complications including a grade three intraventricular hemorrhage, an acute kidney injury and a collapsed lung,” said Shanon. “His doctors and nurses in the NICU took excellent care of him. In the beginning, I didn’t feel like there was much hope – but as the first week passed by, I decided that no matter how bad his condition was getting or could get, I would find the positive in everything. I told myself, even if they could not extubate him, the intraventricular brain hemorrhage was not progressing and he was still having spontaneous breaths and looking around. Moving forward, I would look for the positive and focus on it, no matter how uncertain Easton’s prognosis would be.”

When Easton was three weeks old, Dr. Bautista performed open-heart surgery. To redirect blood flow from one side of the heart to the other, Dr. Bautista reconstructed the heart so that the aorta would be attached to the left ventricle and the pulmonary artery would be attached to the right ventricle. Without this type of intervention, infants with transposition will not survive within their first year of life. After surgery, Easton’s chest was left open to make sure his heart had plenty of room to contract. Since Easton was doing well less than 24 hours after heart surgery, Dr. Bautista and his team closed up his chest.

“My husband and I took turns staying with Easton,” said Shanon. “He spent 55 days in the NICU, and he was also cared for in the PICU after his surgery. During his hospital stay, he was extubated and intubated many times. After his surgery, his condition began improving. He was able to breathe on his own and we worked on his feeding, because of the severity of his illness he was not able to feed successfully by mouth so he received nutrition via a G-tube. As he got stronger and made more progress, we were able to take our baby home on January 11, 2022. That was the best moment for our family.”

Today, Easton is a healthy, happy 4-month-old. He is reaching his developmental milestones like a normal baby his age. He is rolling over, laughing, smiling and doing his little baby babble. He meets regularly with Dr. Mario Fierro, his developmental pediatrician at The Children’s Hospital. He also has follow-up visits with Dr. Sharma for regular echocardiograms to check on his heart. During his recent visit, Dr. Sharma said Easton’s heart is strong and is doing extremely well after surgery.

“While this was a tough journey for us, our baby is doing well because of the amazing care that he received at Children’s Hospital,” said Shanon. “Dr. Pierce, Dr. Sharma and Dr. Bautista communicated with each other on Easton’s care plan. If there was a decision to be made about him, it wasn’t just one person making that decision. They made that decision together, and I appreciated that. As for Easton’s heart surgeon, Dr. Bautista was everything you wanted a surgeon to be. He was straightforward, confident and knowledgeable. He would tell me, ‘I know how to do this surgery and we’re going to get Easton to a healthy place.’ Even a month after surgery, Dr. Bautista was checking in on him. You can tell he was very invested in Easton. He was so happy, and his eyes would light up when he saw how well Easton was doing. Our family was blessed with a great team of doctors and nurses who had Easton’s best interest at heart.”

Easton continues to thrive after having two heart surgeries within the first weeks of his life.