At age 40, Amarachi discovered she was pregnant. Dr. James Hill with the Center for Maternal and Fetal Care was by her side every step of the way helping to manage her high-risk pregnancy.

When Amarachi Ogu found out she was pregnant, she was overjoyed about becoming a mother again. She and her husband, David, are parents to 2-year-old Adaeze who keeps them quite busy. But the couple always wanted a little sibling for their daughter. This time, they were expecting a baby boy.

“We were excited to become parents again,” said Amarachi. “I remember the day when I found out I was pregnant. I was feeling a little dizzy but that wasn’t unusual because I felt the same way when I was pregnant with my daughter. Since I had been bleeding, I thought the chances of being pregnant were slim, but I decided to buy a few home pregnancy tests anyway. When I took the first test, it came back positive. Then I took a second test, and it was positive again. I was surprised and confused. When I saw my OB-GYN, she confirmed I was six weeks pregnant. She told me I was spotting, and it wasn’t a period.”

Since Amarachi had a history of placenta previa with her first pregnancy, and she was spotting, her OB-GYN, Dr. Angela Akonye, suggested she take a small dose of aspirin daily throughout her pregnancy. Since she was 40 years old – pregnant women over the age of 35 are considered high risk due to their advanced maternal age – Dr. Akonye referred Amarachi to Dr. James Hill, a Maternal-Fetal Medicine physician with The Children’s Hospital of San Antonio who monitored her pregnancy and her baby closely. 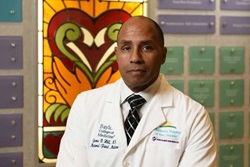 “My pregnancy was extremely difficult, especially during the first 14 weeks,” said Amarachi. “I had so many unpleasant symptoms happening all at once – I had nausea, vomiting, dizziness and extreme fatigue. I was tired all the time. I had to miss two weeks of work because I was feeling sick. The biggest challenge was keeping food down. The only thing I was able to eat was white rice and crackers. For some reason, whenever I am pregnant, I have a hard time drinking water. The whole relationship with water was tough for me at the time. My OB-GYN prescribed nausea pills, which helped me a little bit.”

Despite the symptoms that came with her pregnancy, the couple’s son was doing well. His weekly ultrasounds showed that he was growing and developing like he should. Then, when Amarachi was 20 weeks along, she had incompetent cervix (also known as cervical insufficiency), where the cervix begins to thin out too early in pregnancy, which can lead to miscarriage, preterm labor and premature birth.

“When I met with Dr. Hill, he was concerned about my cervix, and he told me we had to do something quickly before it complicated the pregnancy,” said Amarachi. “He said there were two treatment options to consider. He could put a stitch in my cervix to reinforce it or he could give me vaginal progesterone to reduce the risk of pregnancy loss or premature labor. I was concerned, but I told him please give me a week. I am a person of faith. Let me go home, talk to my husband, and pray on it. He said, “I’ll give you a week but if you come back and it is still there, we need to do something to avoid any complications. When I came back a week later, Dr. Hill did another test on my cervix – and my cervix returned back to normal. Dr. Hill asked me, “What happened? What did you do? And I said, God did it. I felt a big sense of relief.”

As Amarachi’s pregnancy progressed, she continued to see Dr. Hill for her baby’s weekly anatomy scans. She and her baby checked out well. Thankfully, Amarachi didn’t show signs of placenta previa like she did with her first pregnancy, a condition where the placenta covers parts of the cervix which can lead to severe bleeding and preterm birth. She had no major complications other than the physical discomfort of being pregnant. Since the baby sat lower, she had a lot of back pain and wasn’t able to exercise like she did when she was pregnant with her daughter. Once the baby was full term, Amarachi had a scheduled induction for April 12, 2022. But it turns out her son had other plans on when he’d make his debut.

“I remember doing my regular chores at home and running a few errands,” said Amarachi. “Ten days before my scheduled induction, I started to feel intense pressure. I didn’t know I was going into labor because with my daughter, I was induced. I started to feel pressure in my lower back. The feeling was coming every 10 minutes or so. When I got home, I told my husband that I think I was going into labor. I was having excruciating pain. By the time we got to the hospital, I was already nine centimeters dilated. My labor progressed rather quickly. In less than an hour and with one big push, our baby boy was here.”

On April 2, Amarachi and David welcomed their son, Peter, at CHRISTUS Santa Rosa Hospital – Westover Hills. He weighed 6 pounds, 7 ounces. From the moment they laid eyes on him, he stole their heart.

“I was so emotional when I first saw him and cradled him in my arms,” said Amarachi. “It was just an amazing feeling to meet our beautiful son. He was healthy and perfect in every way. I had a wonderful experience with Dr. Hill and his team. That is why I asked to go back to Dr. Hill for my second pregnancy. If I had to be seen again by a specialist, I wanted to be seen by Dr. Hill. He and his staff are very caring, pleasant and professional. They know you by name – and don’t treat you like you are just a patient. Thankfully, I didn’t have complications this time around. From my experiences with my first and second pregnancies, I’ve learned that it really helps when you trust and feel comfortable with your doctor. That’s how I have always felt with Dr. Hill. He has your best interests and your baby’s interest at heart.”

“This pregnancy was such a blessing. The reason my husband and I named our son Peter (meaning the rock) is because God was and continues to be our rock,” said Amarachi. “I unfortunately suffered a miscarriage prior to becoming pregnant with Peter. We were so devastated, but we trusted God to help us heal and restore us, which He did! When I was 10 weeks pregnant with Peter, my husband became very ill and was hospitalized for one week. This was a very difficult time because I was dealing with severe morning sickness and taking care of my husband. Through it all God was faithful and again was our rock through it all.”